It is vital that Medical 24 take the opportunity to review their preparedness arrangements, including shoring up our healthcare workers’ knowledge and awareness of Public Health England (PHE) guidance and Client local infection prevention and control policies for managing VHF. By doing so, Medical 24 Healthcare Workers can play a key role in ensuring that the impact of not only Ebola, but all other high-risk infections can be managed and minimised to the fullest possible extent. To this effect Medical 24 Mandatory Training will now include update on current PHE clinical management guidance for Ebola.

We have also created the following general information for healthcare workers undertaking assignments through Medical 24.

Ebola virus disease (EVD) is a severe viral haemorrhagic fever (VHF) caused by a virus of the filovirus family. It has a high mortality rate – between 50% and 90% (depends where the patient is treated), though this recent outbreak is at 70%. There is still no known cure, although various experimental treatments are showing promise. Around 8, 000 cases and over 4,000 deaths have been reported in West Africa, according to the World Health Organization. This is the largest known outbreak of Ebola.

The recent outbreak of the Ebola virus primarily affects 3 countries in West Africa: Guinea, Liberia and Sierra Leone. The recent outbreaks in Nigeria and in Senegal appear to be being contained, with no new cases for a month.

Recent cases of suspected and confirmed Ebola outside of West Africa have been well publicised in Spain, Macedonia (false alarm), Czech Republic (not confirmed) and the USA, though there is certainly no outbreak in any of these countries.

The outbreak in Nigeria has been largely halted due to the protocols they have in place for such events – similar to the UK. Sierra Leone and Liberia are very poor countries with very little in the way of adequate public healthcare. Coupled with the continued practice of families washing, draining and cleansing deceased family members, the spread has accelerated. There has been a mistrust of the authorities, and a general lack of awareness (or framework to spread the word) which has increased the spread.

FCO advice for travel to affected countries is to limit it to essential travel only. Medical 24 mirrors FCO guidance and advises all our Healthcare Workers to avoid leisure travel to affected areas. However, it is understood that in some circumstances travel is unavoidable. Healthcare Workers should inform their Consultant if they are travelling to affected countries and for what purpose. Anyone travelling to the endemic areas should understand the risks and how to minimise them and what to do if they become unwell abroad or after their return to the UK. If travelling as part of the humanitarian aid effort individuals should ensure they receive appropriate training before they depart. Updated maps of the specific areas currently affected in West Africa.

Ebola spreads through human-to-human transmission via direct contact (through broken skin or mucous membranes) with the blood, secretions, organs or other bodily fluids of infected people, and with surfaces and materials (eg bedding, clothing) contaminated with these fluids.

Healthcare workers in the affected areas have frequently been infected while treating patients with suspected or confirmed EVD. This has occurred through close contact with patients when infection control precautions are not strictly practiced. Burial ceremonies in which mourners have direct contact with the body of the deceased person can also play a role in the transmission of Ebola.

People remain infectious as long as their blood and body fluids, including semen and breast milk, contain the virus.

The incubation period, that is, the time interval from infection with the virus to onset of symptoms is 2 to 21 days. Humans are not infectious until they develop symptoms. First symptoms are the sudden onset of fever fatigue, muscle pain, headache and sore throat.

This is followed by vomiting, diarrhoea, rash, symptoms of impaired kidney and liver function, and in some cases, both internal and external bleeding (e.g. oozing from the gums, blood in the stools).

Risk of infection within the UK

The likelihood of catching Ebola virus disease is considered very low unless you've travelled to a known infected area and had direct contact with a person with Ebola-like symptoms. While it is possible that more people infected with Ebola could arrive in the UK on a plane, the virus is not as easily transmitted as a respiratory virus such as influenza.

The UK has a robust public health system with the trained staff and facilities necessary to contain cases of Ebola. Advice has been issued to the Border Force to identify possible cases of Ebola and there are procedures in place to provide care to the patient and to minimise public health risk to others. Also, Ebola victims do not become infectious until shortly before they develop symptoms. The disease then progresses very rapidly. This means infectious people do not walk around spreading the disease for a long period. It typically takes 5-7 days for symptoms to develop after infection, so there is time to identify people who may have been exposed, put them under surveillance and if they show symptoms, quarantine them.

What if I think I might have Ebola in the UK?

If you feel unwell with symptoms such as fever, chills, muscle aches, headache, nausea, vomiting, diarrhoea, sore throat or rash within 21 days of coming back from Guinea, Liberia or Sierra Leone , you should stay at home and immediately telephone 111 or 999 and explain that you have recently visited West Africa. These services will provide advice and arrange for you to be seen in a hospital if necessary so the cause of your illness can be determined.

There are other illnesses that are much more common than Ebola (such as flu, typhoid fever and malaria) that have similar symptoms in the early stages, so proper medical assessment is really important to ensure you get the right diagnosis and treatment. It is also really important that medical services are expecting your arrival and calling 111 or 999 will ensure this happens.

What our nurses say

I’m new to Medical 24 and I’ve been working with them as a mental health nurse. A friend recommended Medical 24 to me, and they’ve been great. The consultants are friendly and responsive, I get my bookings in advance and the registration process was very straightforward.

I’ve worked in A&E with Medical 24 for about a year. From the first text I got, they hit the nail on the head. They were clear and concise about my income and payment and it was a smooth process. The location I was offered was much closer to home compared to offers elsewhere.
My consultant, Courtney, always answers my questions and resolves issues quickly, and he always takes an interest in how I’m getting on. I really like his approach and listening skills. I would definitely recommend Medical 24.

I’ve been working with Medical 24 for 2 years and I always have enough shifts. The best thing about this agency is the amazing staff - I always recommend Medical 24 and I’m really happy working with you.

My consultant at Medical 24 is always courteous and tries to get the best shifts for me, which isn’t always easy as I can be quite choosy about where I work. Overall, it’s a really positive experience. Shifts suit my life, timesheets are easy and payment is prompt. I would most certainly recommend Medical 24 - it feels good to get a decent wage in return for being a hardworking nurse.

I’ve worked night shifts at local hospitals with Medical 24 for just under a year now. A friend recommended Medical 24 to me, and it’s worked out very well. Shifts are very flexible and the Medical 24 staff are very pleasant.

I have only just started working with Medical 24, but my wife has been with the agency for a couple of years now. So far my experience has been very good, and I always get quick responses from both Courtney and Abdul. I’m very happy so far and would be happy to recommend Medical 24 to other locum workers and service providers.

I started working for Medical 24 in 2019 and I usually work about 5 shifts per week. The staff are always very respectful, courteous and encouraging. I feel like they really care about their nurses and do their best to meet our needs. I would absolutely recommend Medical 24, I think they’re one of the best agencies on the market.  Having efficient staff makes a world of difference.

I recently started working for Medical 24, doing at least one shift per week. Compliance checks were quick, the team was transparent and I got a good explanation of how the recruitment process works. The best part has been communicating with the consulting team - they make you feel part of the team, respected and valued. I would recommend Medical 24 as the team is very professional, approachable and friendly, and there are no hidden fees or surprises.

I started working for Medical 24 quite recently after being recommended by my sister. The best thing about Medical 24 is that I get plenty of shifts and I am always paid promptly. I have recommended a number of nurses to Medical 24.

Our experienced support team is ready to help find you the best shifts at the best locations.

Refer your friends to us and receive a bonus from Medical 24. 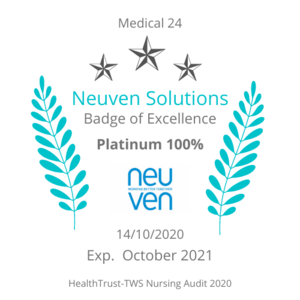